College campuses across the country are once again bustling with students and professors. With the return of school also comes the return of NCAA sports. Although college football players often dominate the fall sports marquee, the NCAA also boasts some electrifying female athletes worth mentioning during its autumn action. Take a look at five Division I female athletes to watch this fall.

Senior defender Abby Dahlkemper not only led UCLA to its first national championship in 2013, but she also became the first-ever Bruins player to win the Honda Award for soccer. She is a three-time All-American, as well as a three-time First Team All-Pac-12 honoree. Dahlkemper was the leader of UCLA’s defense last season, which finished first in the nation with 18 shutouts and had a goals against average of 0.30. The 2013 NSCAA Scholar All-America Player of the Year was also the first defender in 10 years to be named a finalist for the MAC Hermann Trophy in 2013, which is given to the top male and female college soccer players in the nation.

On the heels of a masterful 2013 season, midfielder Emily Wold entered her junior campaign on the preseason All-ACC squad for the second-ranked Tar Heels. Wold was recognized as a First Team All-America selection in 2013, and is the reigning South Region Player of the Year. She led the nation in assists last season with 23 and took her team to the NCAA national semifinals. Wold was also the only collegiate member of the U.S. Women’s National Team this past summer. 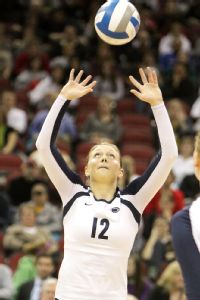 Hancock, a two-time AVCA First Team All-American, enters her senior season fresh-off a national championship with the Nittany Lions. The 2013 NCAA Tournament Most Outstanding Player was also named the Big Ten Setter of the Year last season, after ranking second nationally and first in the Big Ten in aces per set, with 0.65. Penn State’s all-time career leader in aces led her team’s offense with a .305 hitting clip. She and the rest of a young Nittany Lions squad are off to a hot start, and are currently the third-ranked team in the country.

Brian, a senior midfielder and U.S. Women’s National Team member, led Virginia to the NCAA national semifinals last season, while also winning the MAC Hermann Trophy and being named the Soccer America Player of the Year. The two-time NSCAA 1st Team All-American tied for the ACC lead in scoring with 46 points on 16 goals and a league-leading 14 assists in 2013. She was named to Soccer America’s pre-season All-America team this year, and her second-ranked Cavaliers are poised for another strong finish.

Bates was the 2013 NCAA Cross Country National Runner-Up, and received First Team All-America honors in the outdoor 5,000m and 10,000m events. She is the reigning NCAA West Region Champion and USTFCCCA West Region Women’s Athlete of the Year. This redshirt junior distance runner came within three seconds of the NCAA title last year and will likely be the favorite at this year’s championships.