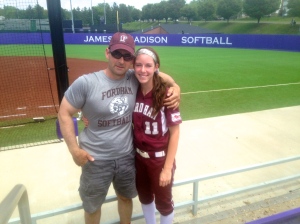 My dad and I take in one final moment together at the field following our loss to N.C. State.

Sometimes you end up in places you’re not supposed to be. Places that once seemed distant, even impossible to get to. Places that transcend your understanding of the possible.

For nearly four months, I’ve taken you to some of these places in my life, through my words and videos, during this roller coaster ride that has been my experience as an NCAA softball player this season. You’ve gotten a look at my on-field struggles and triumphs, team victories and defeats, and nearly everything in between. But, what you don’t know is the most important part of the story, the part of the story that almost no one knows. What you don’t know is why this game and the places it has taken me have meant so much in the real life and times of this NCAA softball player.

I thought about my innermost realities as my dad held me while I cried atop the bleachers at Veterans Memorial Park on the campus of James Madison University on Sunday afternoon. We were the last people left in the park following our elimination in the regional championship game to North Carolina State, via a walk-off home run in the bottom of the seventh inning. A devastating blow to our Cinderella run at the Harrisonburg regional, which saw us knock-out the host team and 12th-ranked James Madison Dukes just a few hours earlier.

While the loss was certainly painful, I cried for reasons more multifaceted and deep-seated than just the angst of defeat. I cried tears of sadness for the conclusion of my time in uniform, tears of relief for the end of what had been the most personally challenging three weeks of my playing career, and mostly, tears of joy for the miracle that softball had been in my and my dad’s life over the past 16 years. It was as if every emotion I had recently been feeling had risen to the surface and was being released from the depths of my being. It was, perhaps, the most cathartic moment I had ever experienced.

What most people don’t know is that my dad and I weren’t supposed to be sitting atop those bleachers on Sunday afternoon; not given the hand we were dealt nearly two decades ago. After a divorce from my mom and some ugly events that followed had complicated our lives when I was young, my dad became a single parent who was left to raise a young daughter all by himself. Needless to say, life during those days was often difficult, as there was even a time when we did not have a place to live.

But, even in our hardest times, the one thing we always had, besides each other and our faith in God, was softball. It became our escape from everything that was wrong, and our vehicle of hope through which everything could once again become right. And, right everything did eventually become in our lives, as my dad was able to selflessly and independently put the pieces of our lives back together and provide me with everything I could have ever needed or wanted throughout my childhood, both on and off the field.

And, for as bad as things once were for us, that’s how great they became through softball. Our means of escape had become our shared passion, and had carried us to places and heights that had previously seemed unimaginable. From our magical journey to the championship game of the Little League World Series in Portland, Oregon, to a first-ever state championship in high school, and the amazing feat of three-straight conference championships and trips to the NCAA tournament at Fordham, softball has given my dad and me more joy than we ever could have dreamed of 16-years ago, when the game was simply a source of therapy from our pain.

Aside from all of the victories and amazing moments we experienced between the white lines, our 16-year softball journey did not come without its fair-share of difficulties. Right up until the very end, together we experienced the agony of defeat, the frustration of slumps, and the struggle to make sense of the inexplicable things that happen in our sport. But, similar to our love for one another, our love for the game never wavered. It remained strong and unremitting, and even propelled us through some of our toughest tests and disappointments along the way.

So, as I cried like a baby in my dad’s arms on Sunday afternoon, I felt overcome by gratitude for all that we had experienced together, the places we had been, and the love that we had shared because of this glorious game.

And, while Sunday completed the final chapter of my life-changing softball story, its conclusion was reminiscent of its beginning; with only my dad and me alongside a ball field, just like it had been 16 years ago. No matter what the scoreboard read during those final moments of my softball career, for me, there could not have been a more perfect ending.