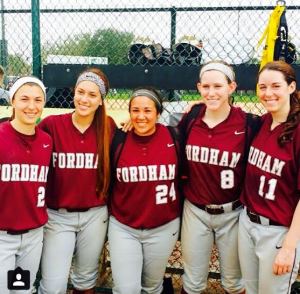 The seniors (minus Serena), after our big upset victory over #13/11 Minnesota at the Citrus Classic.

Over the course of a long and taxing season, letdowns are inevitable. A sudden switch in momentum, an instant of complacency, or a momentary lapse in judgment, and things can suddenly go from hunky-dory to dire, and fast.

In a quick-moving game like college softball, in which you blink your eyes and it’s the fifth inning, transient letdowns can often determine the outcomes of games, especially if you fall on your heels and expect victory to happen just by showing up.

Last Saturday in South Carolina, that’s just what happened to us. Over the course of our game against Gardner-Webb, the David to our Goliath, letdown crept up and quickly turned those seven-innings into our most frustrating loss of the season, and later, a week of reflection.

And lengthy our week was; we collectively dealt with cringing could-haves, regretful should-haves, and long conversations with parents, teammates, and coaches alike about what went wrong and how we went from flying high on a five-game winning streak to questioning our team’s ability, in just two hours of bad softball. On top of it all, we had to wait six days to play again, so the bitter taste and painful vestiges of defeat lingered for much longer than we would have liked.

Amid the animated conversations, prognostications about the remainder of our season, and awkward questions from outsiders about how we could possibly lose to a far-inferior team, however, the week-long reflection allowed me to realize that this loss could very well be a blessing in disguise for us; a reminder that in-between the white lines, nothing is guaranteed and no one is invincible, no matter who the opponent is and what the rankings say. While the naysayers may think differently, our loss to Gardner-Webb could be just the kick in the behind we need to ignite our fire going forward, for this weekend in Orlando and in upcoming Atlantic 10 contests in March and April.

Ironically, the tides will turn for us this weekend, and we will become a Gardner-Webb-like team, as we face our toughest competition of the season at the Citrus Classic. While facing two ranked teams in Georgia and Minnesota, and also playing other formidable opponents during our second stay in Florida this season, it is important for us to remember the lesson we learned from our game with Gardner-Webb: Every team is susceptible to letdowns, no matter how good they look on paper. After all, this is a game played by humans, flawed ones, in fact. And like the example Goliath set forth, no one is invincible.

So, once the first pitch is thrown tomorrow in the Wide World of Sports Complex at Disney World, our slate from last weekend will finally be cleaned and we will have the chance to be another team’s source of letdown; the David to someone else’s Goliath.

No matter what happens this weekend, though, I know that the Gardner-Webb loss will pay long-term dividends for us, even if they aren’t visible immediately. And like we’ve experienced several times before, we can right the wrongs of our past losses simply by turning our letdowns into lessons for the future and attacking our opponents like David did, regardless of being the underdog or not.