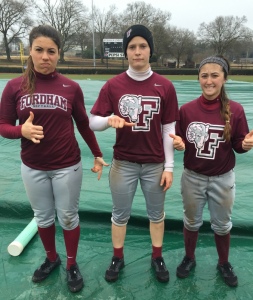 Our outfielders got a little wet while diving at practice in South Carolina.

The weather application on my iPhone has read these daunting figures for the past five days that I’ve been persistently checking it. Since returning to New York from Florida on Sunday night, I’ve wholeheartedly believed that these numbers on my phone, with imaginary icicles attached to them, were simply mistakes. They must be. Just basic human fallacies put on full display for the Apple community to view; simple errors on the parts of the imperfect weather reporters who must have accidentally conveyed the upcoming weather for Maine, or even Alaska, but definitely not Greenville, South Carolina, where we are headed to play softball this weekend. No shot.

For five days, however, these numbers haven’t budged. On Monday, the high for Friday in Greenville was 34, and on Thursday night, 34 it remains. So, unless some divine miracle brings an unforeseen heatwave to the Eastern seaboard within the next 12 hours, this is our bitter reality. And bitter it will almost certainly be.

But, like adjusting to a pitch or an unfamiliar infield surface, the cold weather is just another variable in a game filled with uncertainty. An added curveball, if you will.

In playing this game at the highest collegiate level, however, we have been seasoned to adapt and adjust constantly. This is a game through which we have learned that frequent adjustments are imperative for success to ensue. A game that has required us to take on chameleon-like personae in order to adapt to the ever-changing circumstances within a seven-inning affair, and on a larger scale, a 60-game season.

So, with our compression shirts, hand warmers, and maroon winter jackets in tow, we are as prepared as we can possibly be for the battles that lie ahead at Furman University; even if these battles involve two adversaries at once: our opponent and the unrelenting cold.

This weekend, softball will provide an even greater test of the mind, body, and will than it usually does for us. One likely to involve some stinging hands, chapped lips, and maybe even a few broken bats. But, one that will make us better in ways that are unknown at the moment.

Perhaps, it will make us more battle-tested for the cold, Bronx match-ups ahead in late-March and early-April. Or maybe, it will give us something to pull from the memory bank to provide us with strength when games get long and tough in the future. Or maybe, it will just be a good story to tell. Vis-à-vis a ‘we-walked-nine-miles-barefoot-in-the-snow’ type. But rather, ours will be a ‘we-played-a-warm-weather-sport-in-below-freezing-temperatures’ tale. Something along those lines.

Regardless of what the lesson to be learned this weekend is, something tells me that winning will make 34 feel like 64 pretty quickly, especially on this team.

So, let’s brave the elements and play some ball. And no, I don’t mean snowball.