Former women’s college basketball star Anne Gregory-O’Connell remembers with crystal clear clarity what it was like to be a female college athlete in the late-1970s.

“We actually got the men’s hand-me-down warm-ups and we thought we were totally cool because of it,” Gregory-O’Connell recalled. “My coach (Kathy Mosolino) really had to fight to even get us gym time to practice. That was just the way it was.”

The 1980 graduate of Fordham University was women’s college basketball’s all-time leading rebounder from her senior year in 1980 until 2009, when Oklahoma’s Courtney Paris surpassed her career total of 1,999.

Gregory-O’Connell posted remarkable career numbers along with her 1,999 rebounds (2,548 points, 200 blocks, .568 field goal percentage). The 6-foot-1 forward’s electrifying play not only helped her team’s cause on the court, but also forced people to pay attention to women’s college basketball during a time when women’s sports were anything but popular.

When the former hoops star thinks back to her time in the maroon and white, however, she does not dwell on the gender inequities she and her teammates endured, but rather the pride that comes from having laid the groundwork for what now exists for female athletes at Fordham.

“Even though we had to fight for everything we got, I’m proud of having been a part of that pioneer era for women’s sports,” Gregory-O’Connell, a member of Fordham’s second-ever women’s recruiting class to get athletic scholarships, said. “And I’m especially proud to see Fordham Women’s Basketball under Stephanie Gaitley now competing regularly on a national level and getting recognized for their success.”

After having advanced to the last two Atlantic 10 Conference championship games and winning the title last season, Fordham Women’s Basketball has risen out of obscurity and into the national conversation. The Rams have experienced back-to-back 25-win seasons under head coach Stephanie Gaitley, and are poised to contend for another championship this year. The winning tradition that Gaitley’s squad has reestablished in the Bronx reminds Gregory-O’Connell of the last time Fordham women’s hoops was an annual contender: her own playing days.

Gregory-O’Connell’s playing career at Fordham exhibited the most successful four-year run in program history, with the team recording 91 total wins from 1976-80, and winning the 1978 and 1979 Eastern Regional Championships. While becoming Fordham’s all-time leading rebounder, scorer, and blocker during this time, Gregory-O’Connell was not alone in her record-setting success. Her teammate, Mary Hayes, set the assists record, while Kathy Mosolino became Fordham’s winningest women’s basketball coach in school history. All of these records still stand today.

While each season that Gregory-O’Connell donned the Block F was memorable, the board-crashing legend considers her junior season, which saw her team advance to the equivalent of today’s Elite 8, as her favorite.

“We hosted the Regional Tournament at Fordham that year and we beat Long Beach State, who we were not supposed to beat at all,” stated Gregory-O’Connell, now a guidance counselor at Holy Trinity High School in Hicksville, New York. “Then we got to play against Tennessee and Pat Summit and that was just a huge thrill. We gave them a game.” 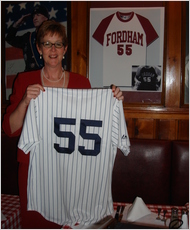 Gregory-O’Connell after her No. 55 was retired in 2009. (Courtesy of Fordham University)

The Fordham Rams finished their magical 1978-79 season with a 27-7 record and the program’s only-ever Top 25 ranking, with a spot at #19. The ’78-’79 squad still holds six team records to this day, including the program’s highest single-season win total. These indelible marks prove that Gregory-O’Connell and her teammates are still the pride of the Rose Hill Gymnasium, even after nearly four decades.

“We had a really good team, a tremendous coach, excellent chemistry, and a really, really good time,” Gregory-O’Connell recollected.

Gregory-O’Connell became the first female athlete inducted into the Fordham Athletics Hall of Fame in 1986. Her No. 55 jersey is also one of just two permanently on display in the Rose Hill Gymnasium, as it was retired in 2009 alongside Fordham Basketball great Ed Conlin.

While the evidence of Gregory-O’Connell’s tremendous college basketball career now rests primarily in the record books and the rafters of Fordham’s primordial gym, the biggest proof of her supreme experiences on the hardwood is evident in her life.

“The discipline, hard work, and confidence I gained at Fordham followed me after graduation,” Gregory-O’Connell said. “And the friendships I made at that period in my life have been unbelievable and long-lasting since college. We all still get together and reminisce about the old times. It was an experience I truly wouldn’t trade for anything.”