For a college or professional athlete, there is no escaping the weight room. It is an essential ingredient in the recipe for athletic success when competing at a high level. The combination of strength and skill allows athletes to raise their levels of play to extraordinary heights, while altering their physical appearances in the process.

As a female athlete, however, the recipe for athletic success is often complicated by societal pressures and gender norms. Because of the common social stigmas that come with being a muscular woman, female athletes are often faced with a conflicting desire to get stronger in order to improve their athletic performances, while attempting to avoid the attainment of a masculine physique.

For women, a constant pressure exists to be toned, but never jacked. But, at what point does one lose her girlish softness, which the media tells us is essential for femininity? For females athletes, it is somewhere between the squat rack and the barbell.

During my experience as a Division I college athlete, I have personally grappled with the issue of maintaining femininity in a sport that requires actions that are anything but feminine.

For a power sport like softball, where quick and explosive spurts of energy are required for success at the college level, weightlifting involves much more than your typical treadmill workout with an occasional dumbbell thrown into the mix. With movements like cleans, snatches, squats, and presses making up our daily training regimens, my teammates and I often find ourselves struggling to fit into our street clothes without standing out amongst other females in the crowd.

In order to uphold our femininity in the eyes of onlookers, we compete with faces full of makeup, hair tied back with ribbons, and body parts adorned in jewelry. Despite our efforts, however, our physiques still hinder others’ perceptions of us, as we are often judged by both our athletic and non-athletic contemporaries as being manly because of our muscles.

The idea that muscles are reserved solely for men and wanting them is a sin worth reprimanding is still an issue that often plagues female athletes today. According to Vikki Krane, a professor at Bowling Green State University in Ohio, society’s perception that muscles equate to masculinity often makes women self-conscious of their appearances, and can lead to eating disorders which hinder health and athletic performances.

Even an elite athlete like tennis star Serena Williams feels self-conscious about her muscular appearance. In 2009, the 33-time Major Champion confessed feelings of insecurity about her well-built arms in an interview with People Magazine.

“I think they’re too muscular. They’re too thick,” Williams said. “Look at Michelle Obama. I’m like, ‘keep wearing strapless dresses!’ But I don’t like mine.” 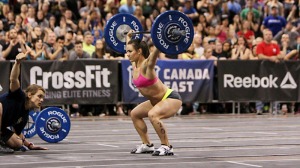 Much of these notions of unattractiveness come from the media’s perception that the stronger the female, the more masculine characteristics she will possess.

Judgment of female appearances and the over-sexualization of women cannot be avoided, even in highly competitive settings. When the phrase “female athletes” is searched on Google, the first two results that come up are Men’s Fitness Magazine articles for “The Sexiest Female Athletes of 2014” and the “Top 10 Sexiest Female Athletes of 2013.” In fact, five of the nine initial results found involve the words “hot” or “sexy” in reference to the description of female athletes.

Achieving the media-driven depiction of the “ideal” athletic body hardly involves the bulky biceps and bulging quadriceps that are realities for most high-level female athletes.

The truth of the situation is that there are no easy answers for female athletes because society does not make it easy to be a muscular woman.

However, with all clichés and nuances aside, overcoming the stigma of being a muscular female athlete starts with the athletes themselves. By refusing to accept society’s expectations as acceptable norms, more women will be empowered by their strength instead of intimidated by it.

With initiatives like Nike’s “strong is the new beautiful” t-shirts, popular Twitter hashtags like #girlswholift, and the emerging popularity of the CrossFit Games on ESPN, more attention than ever is being focused on female strength. The continued exposure of muscular women to the general public will make female strength less of a misunderstood enigma, and more of an accepted norm.

And like any other social movement in our world today, with enough people behind the cause, a change in opinions is definitely feasible.

One thought on “The Fine Line Between Muscles and Masculinity”