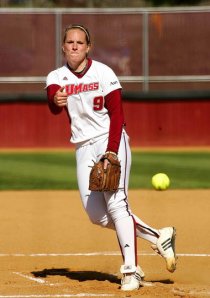 Former Atlantic 10 softball standouts Sara Plourde and Sarah Prezioso find themselves in the minority of players in the professional and international ranks. Following their stellar careers at UMass and Temple, respectively, it is not their skills that set them apart from the world’s best softball players, but rather the pedigree from which they come. Within the professional and international softball scene, where names like Cat Osterman, Keilani Ricketts, and Natasha Watley headline the competition, it is quite uncommon to find players from mid-major conferences in the mix.

Plourde, a 2012 graduate of UMass, is currently wrapping up her second consecutive summer as a member of Team Canada’s pitching staff. The recently-hired UTEP pitching coach believes that many players in mid-major conferences are unfairly categorized as less-skilled than those at big name schools.

“I full-heartedly believe there are many athletes who are overlooked simply because they don’t play in top conferences,” the three-time All-American hurler said. “There are so many talented players in the mid-major conferences, and only a select group has been given the opportunity to play at the next level.”

Plourde was drafted in 2012 by the Carolina Diamonds (now the Pennsylvania Rebellion) of the National Pro Fastpitch (NPF) league, following one of the best careers in Atlantic 10 softball history. She led the country in strikeouts each season from 2010-2012 and finished her collegiate career ranked eighth in total strikeouts in NCAA Division I softball history.

Prezioso recently completed her rookie season in the NPF with the Pennsylvania Rebellion. The 2014 Temple graduate was a three-time All-Atlantic 10 honoree at shortstop, before playing her senior season in the AAC after Temple switched conferences.

Like Plourde, Prezioso also believes players from the Atlantic 10 and other mid-major conferences don’t receive the respect they rightfully deserve from the softball community.

“Since the A10 isn’t considered a powerhouse conference, a lot of players, like me, have been overlooked,” said the first player in Temple softball history to collect 200 hits. “People think that [we] are only doing well because of the competition we play against.” 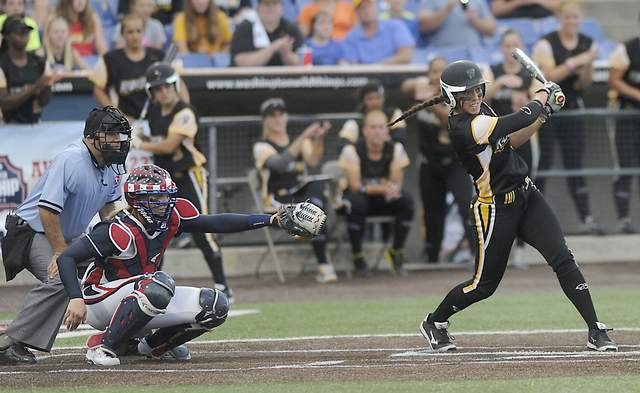 Sarah Prezioso smacking a game-winning double for the PA Rebellion off of Keilani Ricketts of the USSSA Pride in July. (Courtesy of Katie Roupe)

Prezioso thinks it is the exposure that players from “big time” schools get, and not their talent, which separates them from mid-major players.

“In the NPF there are all the big name players who everyone knows about because they are featured on television,” Prezioso said. “It is such a shame when you play the same level of Division 1 softball and can compete at a high-level in the NPF, but are thought of as a lesser player because of the school you went to and the conference you played in.”

At the center of the issue, Prezioso believes, is the difference in funding between major and mid-major programs.

“Because of how financially well-off some schools are, they have the money to give [scholarships] to high-caliber players and put into their facilities, uniforms, travel, and stadiums,” the former All-Region shortstop said. “Recruits look for these types of things when choosing their schools.”

Plourde firmly believes it will take more than just money and television exposure for the Atlantic 10 and other mid-major conferences to take the next step and gain similar respect as the PAC-12, SEC, and Big 12.

“Winning against the teams with higher rankings and harder schedules is what mid-major conferences need in order to gain the same respect as the powerhouse conferences,” Plourde said. “To be one of the best, you have to play and beat some of the best.”

The 2012 Atlantic 10 Pitcher and Player of the Year speaks from personal experience, after leading UMass to three Top-40 finishes in her four collegiate seasons. Plourde recalls her UMass team from 2009 as an example of mid-major success amongst the nation’s best. That season, UMass took the eventual National Champion Washington Huskies to a third and decisive 15-inning game in the NCAA Regionals, and finished ranked 24th in the country. 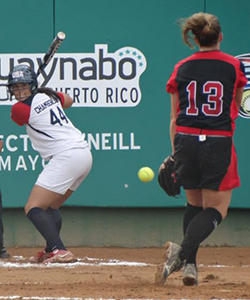 Plourde (13) pitching to Lauren Chamberlain of Team USA in 2013. (Courtesy of Team Canada)

“That year, we had fantastic leadership, passion, and chemistry, and although we didn’t win [Regionals], we still sent a message that people have not forgotten today,” Plourde stated. “With the right ingredients, a mid-major school can definitely send a large shock of fear or intimidation across the country.”

A prime example of consistent mid-major softball success is the Louisiana-Lafayette program. The Rajin Cajuns, out of the Sun Belt Conference, have played in six Women’s College World Series since 1993 and are perennially ranked in the Top 25. ULL’s feats demonstrate what a mid-major program can accomplish with a successful formula and winning mentality.

Plourde believes a winning mentality develops from heated rivalries and in-conference battles that prepare players for competition against big name schools. She credits her experiences at UMass against Atlantic 10-rival Fordham as the preparation that was necessary to compete against top-flight teams and players, both in college and professionally.

“People often say about big moments or pressure situations, ‘act like you’ve been there before,’ and because of our A10 rivalry with Fordham, I can actually live that feeling of performing well in high-pressure situations,” Plourde recalled.

Despite being underestimated for having played at mid-major schools, both Plourde and Prezioso have helped legitimize Atlantic 10 softball, while proving their worth on the professional and international stages. Both women have similarly used the underdog role to help propel their professional careers and pave the way for future post-graduate softball success of other mid-major players.

“It takes a lot of work, but having the drive and passion to work hard to play amongst the best in the world, especially after initially being over-looked, can be really rewarding,” Plourde attested. “Is one game going to make mid-major teams and players emerge as dark-horses? No, probably not. But why not keep building on it? It is definitely not out of the question.”