And we’re off. The 2014 Fordham Softball Rams are on the precipice of a three and a half month journey. On the eve of our first game, I can’t help but think of all that is ahead of us. That is part of the reason why I decided to document my weekly feelings throughout this season; in order to capture the most significant moments and emotions that I feel (good and bad, big and small), that could get lost in the shuffle of a grueling 60-game season. This tends to happen during such a long season, especially when our sights as softball players are constantly focused on the next pitch, next game, or next championship. When I think about softball seasons of the past, I often only remember a few moments in time; split seconds of unadulterated joy or sadness, which define entire seasons in my mind. In retrospect, this saddens me when I think of all the details that have been lost. I know Whitman said in his poem Continuities (which happens to be one of my favorites), “Nothing is ever really lost or can be lost,” but I don’t buy that. I think a lot of the most important details of a season are lost because they are not the big hits, diving plays, great wins, or bad losses. A story is not defined by its opening line or closing details, but rather the chapters in-between. I feel that it is of the utmost importance to capture these chapters, not only for myself, but also for my teammates. I don’t want the so-called “defining” moments (the wins, losses, home runs, strike outs, diving plays, errors, good and bad games) to define this season. I want to embrace the process and cherish the memories that will help us get to our ultimate result in May or June, whatever that result may be.

I’m someone who spends a significant amount of time thinking about the future, whether it is an assignment due next week or an at-bat months in advance versus a certain opponent. I think about the future so much that I often forget to enjoy the present. So, this journal is for both my present and my future. In my present, I hope it enables me to reflect internally and provide clarity for whatever it is I’m feeling throughout the highs and lows of this 2014 softball season. Plus, as my father reminded me today, writing is cathartic and introspection is crucial for personal growth to occur. For my future, I hope this journal affords me the opportunity to reflect on a part of my life that I know I will always cherish and yearn for. 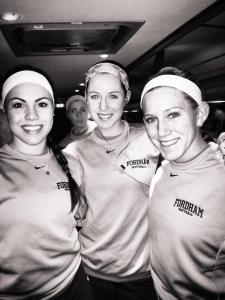 (from left to right) Serena, me, and Michele before our first game of the season against LIU. Shout out to Tina for the photo bomb.

Now, as I start my third go-around on this path to the postseason, I am able to recognize that I am merely a shell of the player and person I have been in each of my previous two seasons. As a freshman, I was timid and intimidated by the names on the jerseys of opposing teams, while often questioning if I belonged at the Division 1 level. As a sophomore, I was still unsure of myself as a college softball player, but was filled with enough determination to mask these feelings and succeed enough to make a name for myself and help my team win. As a junior, I’m a seasoned veteran who has been through the highest of highs and the lowest of lows, and I know that the college softball season is a marathon, not a sprint. During this marathon, I know to expect moments of weariness, thoughts of doubt, and potential diversions to creep in and affect my performance in the race. What I also know, however, is that I have been preparing for this marathon since I was six years old, and all I need is a little wind at my back, and then I’ll cruise. Cliché, I know, but I believe my previous experiences will truly help me to reach my full potential as a softball player this season.

With that being said, I am approaching this season with a new type of zeal and anticipation. I’m ready to leave a mark and do something truly special with this group of young women I have gotten to know and love during our time together at Rose Hill. These feelings, coupled with the usual butterflies that I have felt before every softball season since I was six years old, remind me why I love this game and believe it to be the best. I think the coolest thing about the college softball season is that even though it is a marathon, I am not running alone. It’s like a really, really long relay race, with 18 other participants to account for. During this relay-marathon, I don’t have to run the fastest or flawlessly, but I do have to make sure I carry my own slack and know when to hand off my baton to the teammate in front of me.

As I step up to the starting line, I take a deep breath, put the blinders on, and know with my whole-heart that I’m ready to run.

One thought on “The Chapters In-Between”